Zane’s favorite “episode” from the Little People: Discovering Animals DVD is called Trading Places. Farmer Jed’s animals are a little confused. The cow is baaing, the sheep is mooing. In the end the animals discover that they are happiest being themselves.

Zane’s favorite part is when they sing “Farmer Jed, he had a farm. E-I-E-I-O.” He sings along as loud as he can. He requests this video by saying, “E-I-O Mama! E-I-OOOO!”

Here’s a little video of him singing. He also has strawberry icing on his face from the Valentine cupcakes we made together. Someone ate all of the sprinkles that were supposed to go in the cupcakes. I’m not naming any names, but he’s short and weighs about 25 pounds…. 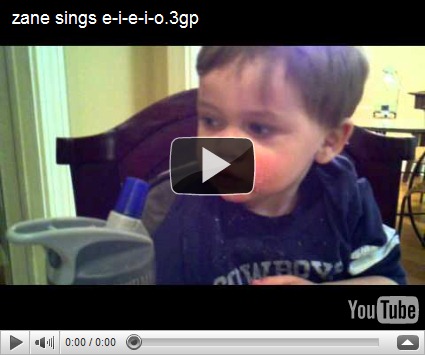 Not a lot of excitement going on here. Just more and more snow!  Zane is still loving it and wants to go ‘ah-ha’ (outside) all the time. Unfortunately, it was 16 degrees here this morning, so I held him off until after lunch. By then it was a balmy 26! 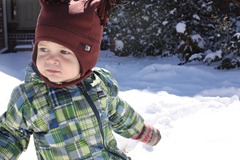 Usually snow in Arkansas is a HUGE deal, but we’ve had so much this year that I think Zane is no longer impressed by it.  I guess this is good practice for me getting us both bundled up and out the door!  I’m sure we’ll be doing a lot of this in Wisconsin next year!

Some of these pictures were taken with my phone, so they’re a little blurry. 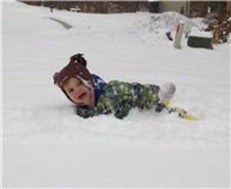 This boy really loves the snow! As soon as we step out the door he starts rolling around in the snow! He just laughs and jabbers and has a great time!  Kind of reminds me of the way he acts in the swimming pool…just jumps right on in! 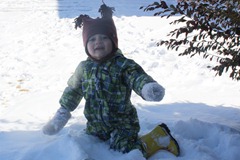 He LOVED the neighbors’ sled. It had a rope attached with a handle that was just perfect for me pulling him around. It was so much easier to pull than I anticipated. 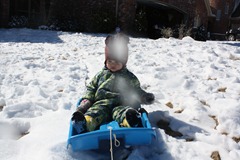 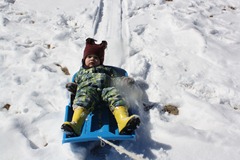 He loved riding with “Kin Kin”.

I thought he was going to fall asleep riding on the sled because it was a little, ok a lot, past naptime.

Speaking of it being past naptime, here he is throwing a little tantrum in front of the neighbors’ door. I’m sure they wondered what all the commotion was going on outside their door. 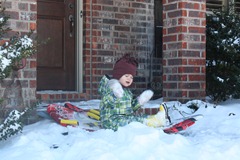 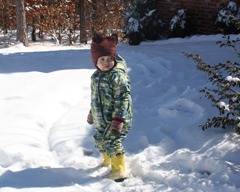 Yesterday when we came in, Zane’s hands and feet had gotten wet and were freezing! They were so red and I felt horrible. Today I tried something different. I kept him in his footie pajamas under his snow suit. Then I put a pair of my really long, thick socks on his feet and up over the snow suit. I also put a pair on his hands (over his mittens) and pulled the socks up under his snow suit. This kept his mittens from falling off and snow from getting down in them. Worked like a charm! His hands and feet were completely dry and warm when we came back inside!

Finally, here are a few pics from my camera from the last two snowed-in days. 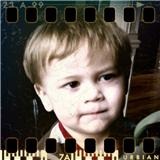 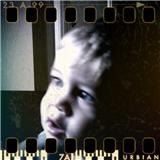 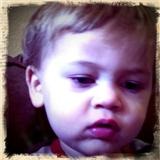 Technorati Tags: snow in Arkansas
Posted by The Bells at 6:17 PM No comments:

It’s a good thing he likes it….

The SNOW, that is! It would be a long three years in Wisconsin if he didn’t. As you can tell, that’s pure joy on his face! 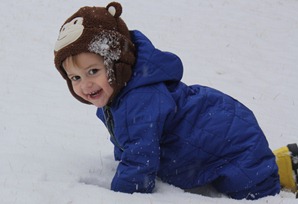 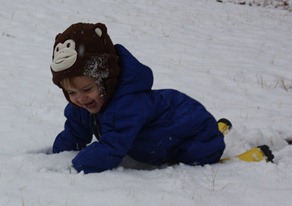 This boy loves playing in the snow. In fact, it’s quite the challenge to get him back inside where it’s warm. 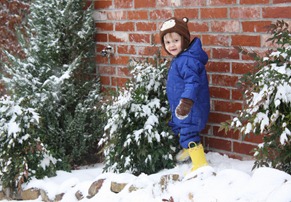 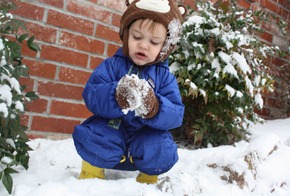 It’s a good thing his snow suit from last year still fits. Yup, it’s a 12 month. So was the sweater he wore to Wal-Mart this morning.

We braved our way to Wally World this morning…not because I was freaking out about bread and milk, just because we had NO groceries. Worst Wal-Mart trip ever! Not because there were a ton of people, but because Zane had a crying, screaming fit for about 30 minutes! He was yelling something about Sponge Bob. I dunno? If I could’ve figured out what he wanted, I would’ve happily given it to him. Just to shut.him.up. I felt like all of Pulaski County was staring at me. Oh, yeah…back to the fun stuff. 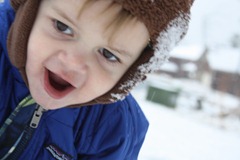 He sure was happy to be out playing in the snow!

And he looooves eating the snow! 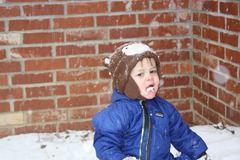 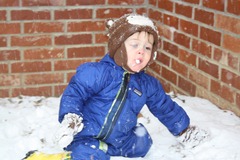 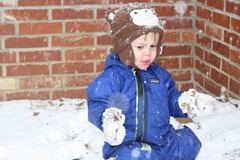 Not sure why he crawled around in it for a long time. 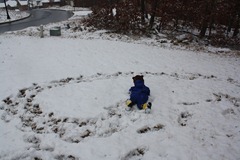 Then we came inside, changed clothes, and got cuddly on the couch.  Here’s hoping for a long winter’s nap! 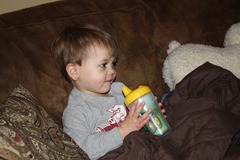 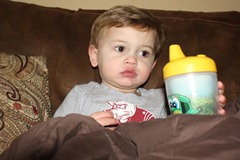 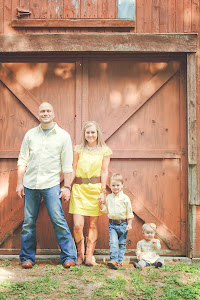 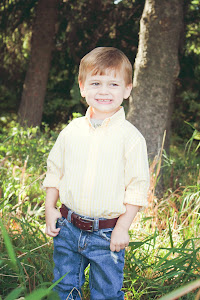 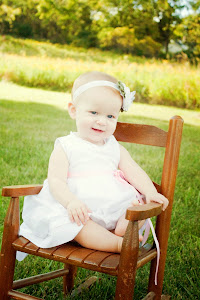